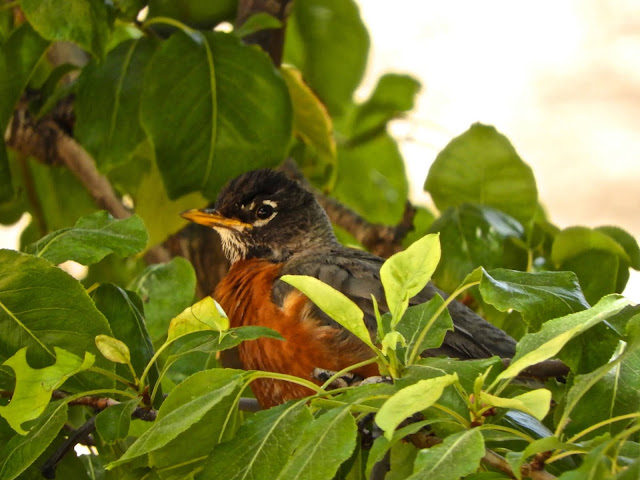 Over the past two years, I've spotted an American Robin where I live on two occasions.  The first time I saw him, he was getting a drink from a water spigot.  I couldn't believe my eyes.  Robins don't live in the Phoenix area.  Then months went by before I saw him again hopping across the lawn near the front entrance.  On Saturday I decided to take my camera down to center courtyard, just outside the pool area and sit for a while to watch and see if I could see a robin show up.  I didn't hold out much hope but within 15 minutes, I spotted one.  He appears to be a young one because his feathers are still pretty fluffy but, there is no denying that bright 'red' breast. 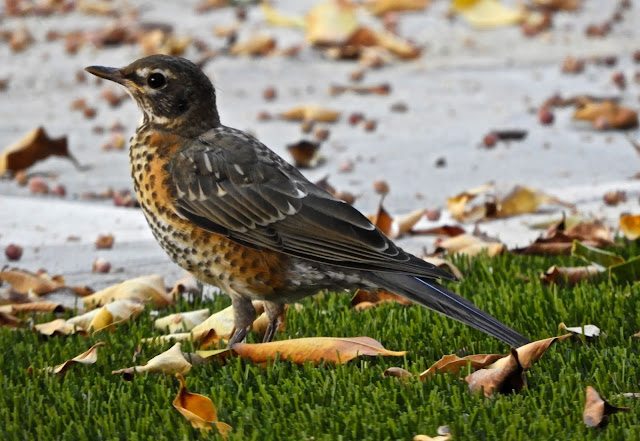 Then a few minutes later, I spotted a mature female.  After that, I saw several more females in the same area.  I grew up in Illinois, a place where robins were common.  We saw them all the time. But when I moved to Arizona, I never saw them and a little research told me that they just don't live in this area.  Imagine my shock when I saw the first one two years ago.  Since I didn't see him again for many months, I told myself he was just passing through. 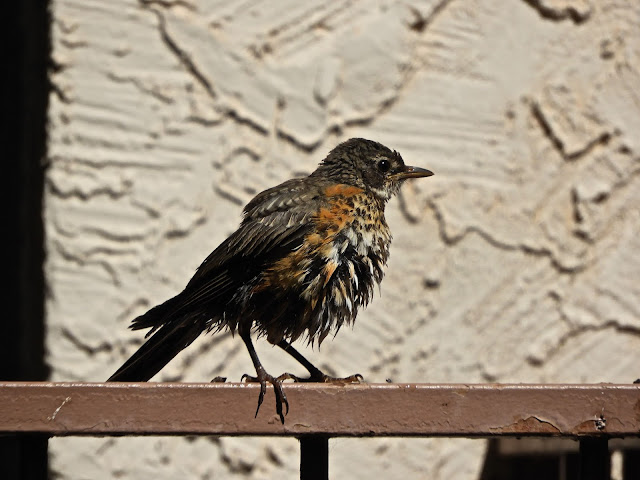 I'm now convinced that a family of robins are living on the grounds most likely in the giant ficus tree that looms over the center of the complex.  I caught this female just after she took a rather rambunctious bath in a decorative pond.   Seeing these birds I've missed for so many years makes me so happy.  I'll be watching to see if I can catch some more photos in the future.
Posted by Sharon at 1:00 AM

Nice photos Sharon. There's a migration going on out there. Animals are going to places that they have never been before.

Yu will be hearing Robin songs! Our Robin was still singing last night at 9:30 in the dark and up this morning at 4:30.

You got some nice shots of the robins, well done Sharon.

If I lived I Phoenix, I'd think a refreshing plunge into a pool would be just the thing. :-)

oh yes he is a lovely fellow.

We have robins up here. Your description of the one taking a rambunctious bath fits perfectly with the way they splash around in our bird bath. Fun to watch.

That's great! We have lots of them here, some year round. I hope you're able to hear them singing. I really like their songs.

Interesting! I wonder if there's something about seasonal or climate changes that make your area acceptable to them now? Or maybe they're just outliers. I never noticed that female robins have a spotted breast very similar to some British thrushes. (Apparently American robins are a type of thrush.)