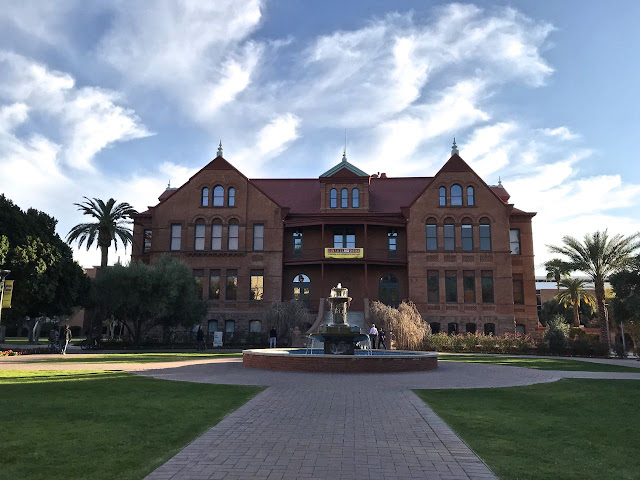 It's not only April Fools Day but it's also a theme day for City Daily Photo Bloggers and today's theme is School.  I took this photo back in January of 2019 when I was in Tempe to go to a lecture at the Arizona State University School of Civic and Economic Thought and Leadership.  Many of the lectures take place in this building affectionately called "Old Main".  It's one of the oldest buildings on the campus.  In fact, it was constructed before Arizona had reached statehood.  It was dedicated February 4, 1898 and was the first building in Tempe to be wired for electric lights.  The day after Teddy Roosevelt dedicated the Roosevelt Dam, he made a speech from the front steps of this building on March 19, 1911.  In that speech, he predicted that because of that dam, the valley's population could reach 100,000 by the year 2000.  He was off on that figure by a few million.  The population in the year 2000 was 3,251,876.  It was almost 5 million in July 0f 2019.  I think Roosevelt would be impressed.

To see more schools from around the globe, click here.
Posted by Sharon at 12:00 AM

Wow. So glad to read this piece of History that I did not know.
Just take good care of yourself Sharon.

Interesting story, Roosevelt had a realistic view at the future although he couldn't have imagined that it would be so many more people!

Wow... this building is a classic oldie.

There's a lot of history attached to this fine old school Sharon, must be lovely to study here ✨

It is beautiful, Sharon! It looks like a place of learning.

Wow, what a beautiful building, very impressive. I like the history bit about Roosevelt.
Stay safe, Sharon.

I bet Roosevelt would be shocked to know how big the area got! (And probably by how much the population of the country, and the world, has grown since 1911!)

I love looking at old school houses. I hope you will continue to take pictures though we have a stay at home order. Ours isn't as restrictive though as other states.

What a beauty, and such a storied past! I suspect even the most forward-thinking leader probably couldn't have imagined today's world. I wonder what the population of the region was in TR's day. Maybe a whopping few thousand?

That is a grand building.

It's nice it's still standing and looking very grand.

What an interesting underestimation by Roosevelt! Love the architecture of this building though.