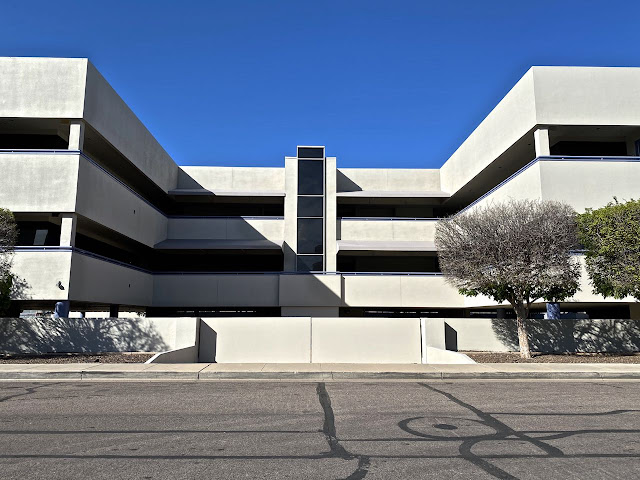 Two weeks ago when I was out driving around, I happened to drive by this office building that I have featured on this site twice before.  The first time I pictured this building was in August of 2008 when I first noticed it.  It faces a street that gets very little traffic so I actually have to go out of my way to see it. Back in 2008, I loved the way there were cactus growing from each of the balconies.  Then in July of 2012 I saw the building again an noticed how much it had changed.  The cactus were gone but it had a fresh paint job that was quite attractive.  Now it's almost 6 years later and once again the trim on the building has changed colors leaving it a bit bland looking.  And, it looks like one of those trees out front is not doing well at all.  I like the look of the place so I'm hoping it can get some of its pizzaz back again.
Posted by Sharon at 1:00 AM

It reminds me of a couple of buildings here.

Kind of formidable looking, I think.

I think I like the blue trim here better than the green trim Sharon, but it is an intriguing building, hard to tell what's going on behind that stern facade :)

I like the look when it had the cactus, it compliments the building and that is what you would expect to see in Phoenix.

It is very stark without the cacti!

I think it looked best with the cacti. It's a bit stark now, isn't it? And yeah, that right-hand tree is definitely kaput.

In my opinion it was at its best with the cactus in your first photo. It's lost any claim to identity since then. You're right. It's bland looking now.