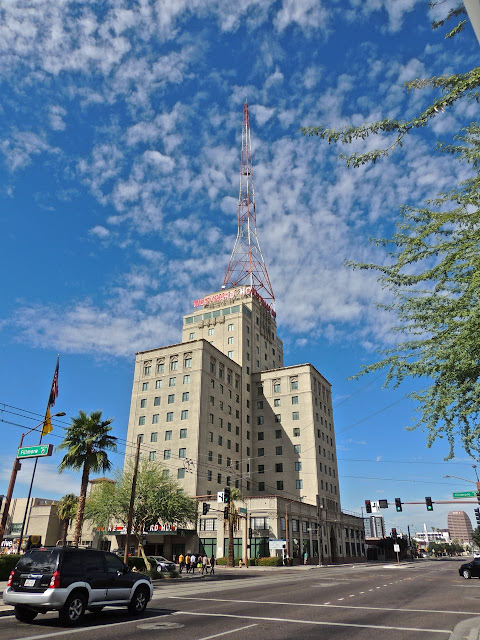 The Westward Ho was built in 1928 and for a while it was the tallest building in Phoenix at 16 stories.  It lost that title in 1960 when a new building in downtown Phoenix was completed.

The Westward Ho started life as a hotel and operated as such until 1980.  There used to be a restaurant on the top floor called The Top of the Ho.  And, there were several ballrooms that were used for numerous large events.

Today it has been converted into subsidized housing apartments for the elderly and mobility impaired.

In all the years I've lived in Arizona, I've never attended an event in this building or had any other reason to go inside.  I wonder what it used to be like.

It looks well preserved, nice it is used for several apartments now.

Wow that sky seems to really bring the photo to life.

Sounds like a great reuse. You could volunteer to lead an art or photo class for the residents.

Quite a different use now.

I would wonder too.

It was probably a big deal to go to an event there back in the day, Sharon. It sounds like it has a good reuse.

A well preserved building that has adapted to the times.

It's good they're still using it and didn't just tear it down. "The Top of the Ho" -- LOL!