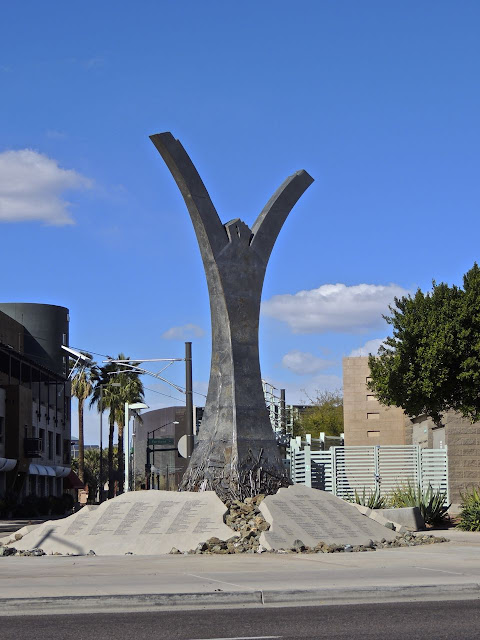 I can't believe I've never featured a photo of this statue before on my site.  It has been sitting on the corner of Central Avenue and Roosevelt streets for many years.

This sculpture was created by Robert John Miley and is made of melted down weapons that were used in violent crimes throughout the state of Arizona.  Miley spent 10 years gathering materials and funds for the statue.  The city of Phoenix chose the location and Arizona law enforcement donated the confiscated weapons.  It stands 24 feet tall and weighs 8.5 tons.

The base of the statue is configured so bits of the weapons are easily recognizable.

Miley named the statue for an organization he founded called Release the Fear, Inc. The non-profit was organized to "counter the effects of violence in our society".

Impressive indeed, and a bit sad that he needed to make the sculpture.

When one throws their arms up in the air it is to express or indicate exasperated despair.

Art with a message, with meaning.

What a great idea, to take weapons and make something artistic and creative from them.

All weapons should be melted to create art. Impressive.

Well, to Andy I would say throwing one's arms up in the air can be jubilation as well. Whatever, this to me is a rather unexpected piece of work given my impressions of Arizona, derived by the "news" of course over the last few years. I've always enjoyed being there, though it's been a long time.
And to Andy, I've just looked at your blog and some good photos! I'll be back even though you sound like a grumpy old man in the above post. I'm a grumpy old woman, and know grumpiness for sure!

What a wonderful sculpture Sharon, love the arms thrown in the air as a sign of joy and very happy to think at least some guns are off the streets.