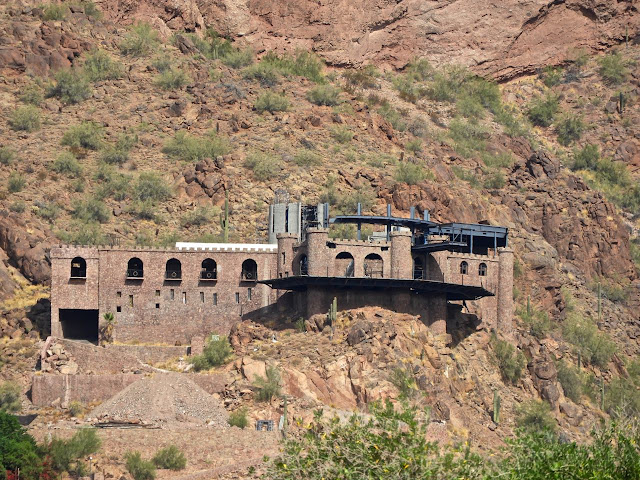 Last weekend, I took another photo of what remains of Copenhaver Castle on the south side of Camelback Mountain.  The first time I featured this Phoenix landmark was back in 2008  when I told about its origins.  The original owner went bankrupt and the castle sat empty for a number of years.  In 2012 a new owner purchased it for 1.45 million dollars.  The new owner's plans were to stabilize it and refurbish it.  That was in 2012. 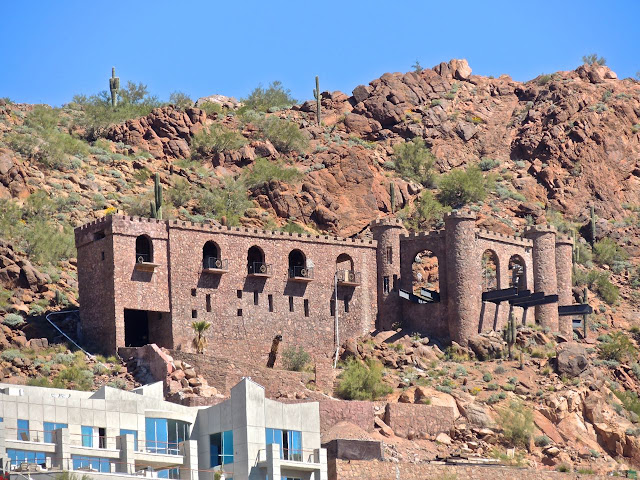 Here is what it looked like in March of 2017 when I photographed it.  You can see those steel beams protruding from the tall windows.  It looked like the reinforcements had started. 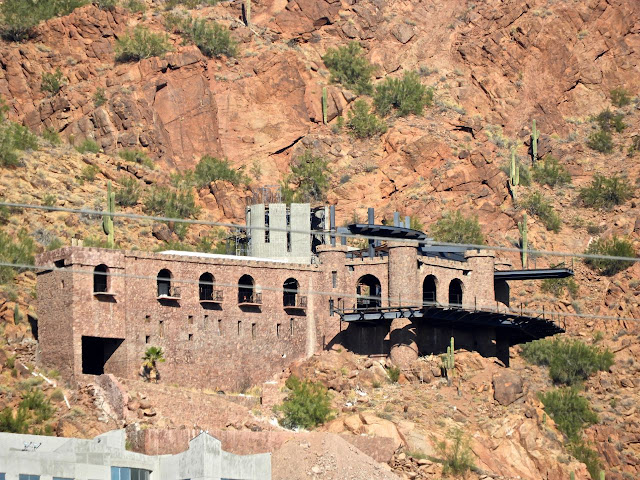 This is a photo I took on November 17, 2019, almost exactly one year ago.  If I compare this photo to the top photo that I took on November 21st, just last weekend, it looks like nothing has happened for at least one year.  I did some digging online to see if I could find out why.  The only thing I found was that back in 2016 the neighbors got a little upset with the owner and filed several complaints about debris and other things.  It's obvious that more construction has happened since those complaints but I'm wondering what seems to have slowed things now.  Maybe it's just issues because of the pandemic.  However, a quote from one neighbor in the article about the complaints said "He's destroying Camelback Mountain.  It's not going to end well."  That sounds rather ominous.

I have a new post on Sharon's Sojourns today.  This time it's Rothenburg ob der Tauber.

Interesting. It has the advantage to bring life to this side of the Valley. Neighbors are not always best friends.

Maybe it was too expensive to fix the place up.

That may be the case.

Lucky me. I have always had good neighbours.

An amazing mountain side. That kind of construction is complicated.

Money problems? It may have had a lot of hidden issues that are proving hard to resolve.

It does seem to be moving along pretty slowly Sharon, bet it costs a fortune to construct in a spot like this. Doesn't help if you have impatient neighbours. Will have to keep an eye on it for us 😊

I'd say the destruction occurred when the house was built in the first place. Stabilizing it doesn't seem like it would do a great deal of harm. In any case, I hope it's finished eventually! It's probably really hard to do construction and get supplies in the pandemic.

Hey, they at least improved the deck. Maybe. :-)

You don't want the neighbors to be unfriendly but it seems that they are not happy. That's a long time to have an unfinished project like this.

The mountain would look better without that building there in my opinion. It's rather ugly.

Sounds like he has bitten off more than he can chew. Not sure I would want to move in where the neighbors already didn’t like me.

Sounds like the NIMBY factor is in full swing.

It's an unusual place to live but personally i'd be worried about rocks coming down the mountain.