Other times ‘a man’s castle is his home’ 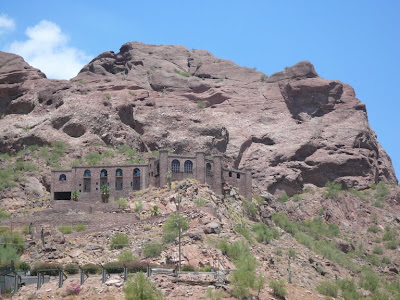 When I spotted yesterday’s house I immediately thought of this well known Phoenix residence built into the side of Camelback Mountain. This house is known as the Copenhaver Castle named for the Phoenix orthodontist who built the place over a twelve-year period during the 70’s and into the 80’s. The exterior walls were built of stone blasted from the mountainside property which makes it blend into the mountain’s terrain and almost disappear in certain light. The house has been featured on the television show “This Old House” and other television shows. At one time, Dr. Copenhaver opened the home to tours on special occasions, but after the home sold in 1989, it is now a strictly private residence. The home was built in the style of a Moorish castle complete with battlements and rounded towers.

Wow, what a structure. Wouldn't you love to explore the inside of it? I wonder if all the floors are made of stone.

Beauty with destiny.
First owner - bankrupt, second - too, at a moment it belongs to insurance company and on sale for 3mln and renovation requires 3mln more (at least what I googled and hope very much they are wrong( ).
Great photo with mountain.