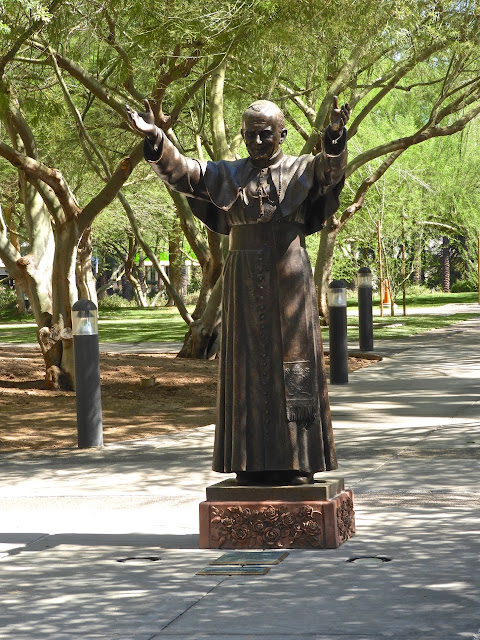 This statue of Pope John Paul II is located in downtown Phoenix in the park next to St. Mary's Basilica.  It commemorates Pope John Paul's 1987 visit to Phoenix.

There is no artist's name for the statue but I did learn it was cast in Pietrasantre, Italy.

The pope visited 9 cities on that 1987 tour and Phoenix and Tempe were two of them.  In Tempe Arizona, he said mass for 75,000 people in Sun Devil Stadium.  I remember when he was here but I didn't attend any of the events.

I have a new post on Sharon's Sojourns today.  A visit to Abbey Road Farm.

I don't care about religion, when anything bad happens in the world religion is usually to blame.

I have been to St Peters Square on a Sunday morning twice, my office closed the day he said mass two blocks away, security was complicated

Religion isn't my thing, but the statue is good.

Who ever created Pope John Paul's statue certainly has talent.

It is a great statue. I would avoid those crowds for sure.

Wonderful likeness. I wonder how the towns were chosen for his visit?

Interesting. I wonder how unusual or unique it is. Did the foundry in Pietrasantre cast these in multiples for any community where the pope spoke?!

The statue looks well sculptured. A great vibe to it too.