Navajo Textiles from the 1920's 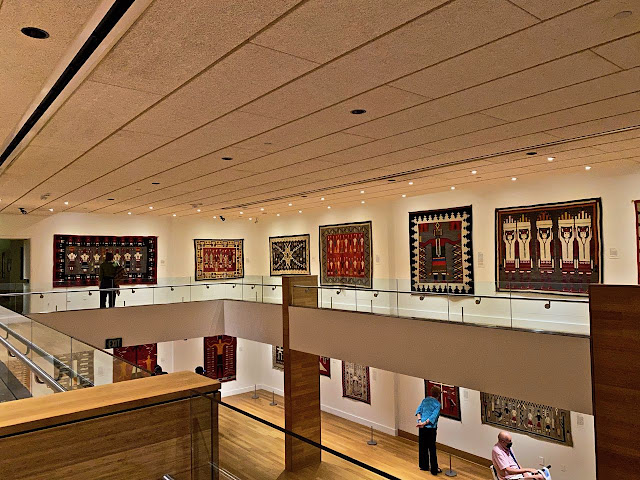 The show that was opening at the Heard Museum Friday night was a collection of early 20th Century Navajo textiles.  They were all gifted to the museum in 2018 by Jean-Paul & Rebecca Valette and were from their private collection.   The artists were unknown in the majority of the weavings but instead of saying "unknown" on the description cards, it said "Artist Once Known".  I liked that. 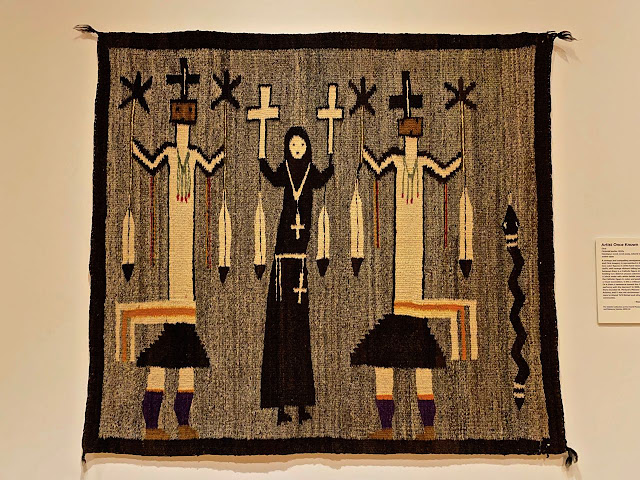 I've included two weavings from the group that stood out to me.  This one is most unusual because it depicts a Catholic figure along with ceremonial dancers.  In the description, the writer speculates wether this was a critique of assimilation or if there is a reverence toward this figure.  In 1898, Franciscan Friars founded St. Michael's Mission in northern Arizona and it was not uncommon for friars and nuns to attend Navajo ceremonies. 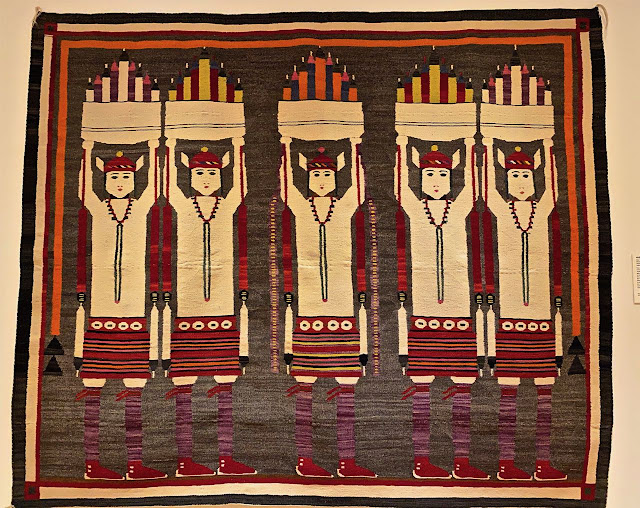 In this one, the weaver is depicting dancers in the Mountain Way Ceremony.  The dancers are maskless and they are holding head pieces representing antlers.  The description card said that it was unusual for the facial features to be so detailed.  The construction of this piece is unique in that it was woven in landscape format meaning the weaver used a very wide loom.

I think I find these pieces fascinating because my grandmother had a Navajo rug that my grandfather brought back from one of his many trips while working for the Santa Fe railroad.  Unfortunately, that rug was used on the floor in front of the entrance to her home.  I am guessing that rug came from the same era as these beautiful pieces.

I have a new post on Sharon's Sojourns today.  Have you heard of the "Vessel"?

These are spectacular Sharon.

Oo! Any one of those would look great on my living room wall.

Nice to see that the collection is being preserved.

The words "once known" is so well chosen for these gems.

These are wonderful, Sharon!

A beautiful collection that lots of people can now enjoy.

Beautiful work! I also like the "artist once known" description.

oh this is fab, I really appreciate native art.