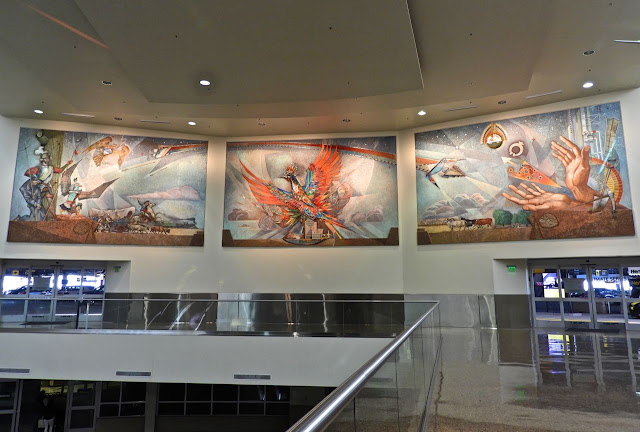 This mural was recently unveiled at the new rental car center at Phoenix Sky Harbor International Airport.  It was originally created in 1960 by artist Paul Coze for the then new "Terminal 2" at the airport.  However, terminal 2 was closed last year and the fate of this fabulous mural was uncertain.  Fortunately, the mural was carefully taken down and cleaned before it was installed in this new facility. 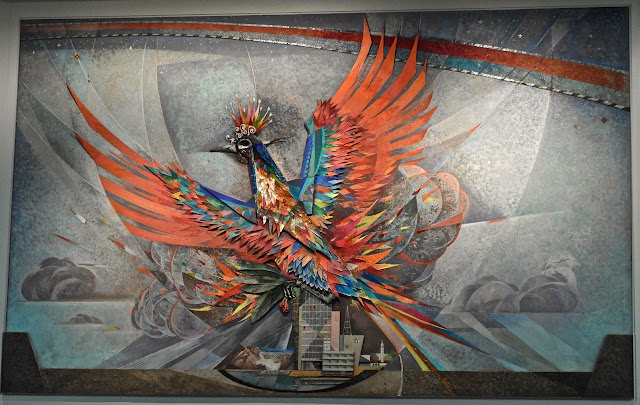 This beautiful Phoenix bird was the perfect way to greet passenger arriving in the city. 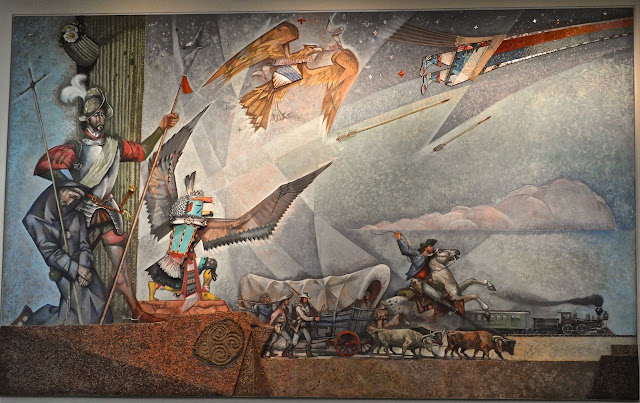 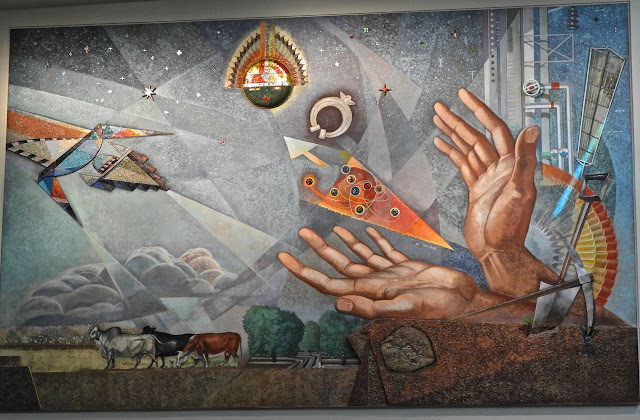 In addition to the magnificent Phoenix bird in the center of the mural, the two side panels depict aspects of the history of the Phoenix area.  The mural includes tiles, glass and gemstones and there was also sand and soil used from Hopi and Navajo reservations, the Grand Canyon and other Arizona locations.  Abalone shell and volcanic glass make up the bird's eye.

Paul Coze (1903-1974) served as French Council in Phoenix and he taught art classes.  He was born in Lebanon and spent his youth in France before moving to the United States.  It is said that this was the first piece of public art to be commissioned by the City of Phoenix.  I am thrilled that this fabulous work of art has been so lovingly preserved and will continue to be enjoyed.

Taking part in Monday Murals
Posted by Sharon at 1:00 AM

These murals are fantastic. It's nice to know that someone cared enough to preserve them.

So glad it was relocated, saved. On the left hand panel, I would read that as a timeline, if the native americans were before the Spanish explorers.

These are wonderful works of art, Sharon! It is so good they have been relocated and given such a good space.

Such a beautiful and historical piece of art!

Beautiful works of art. Glad someone decided to take good care of them and install them in the new facility.

YES! It's so great that they saved and preserved this mural. Far too much of our architectural artwork winds up being destroyed. I especially love the Phoenix.

In the third close-up, doesn't it look like those hands are catching a piece of pizza?

I like the looks of that slice of pizza in the last panel.

Wow a mural from 1960! So wonderful that it was restored and displayed again as it is a beautiful set of murals.
Thanks for participating in Monday Murals Sharon.

My sincere apologies for my late visit. I am having a terrible time trying to leave comments. I keep getting error messages.

This is a truly MIXED MEDIA mural. I am SO glad they were able to save and restore these panels to their previous glory. Pure beauty and so well done. Appropriate for your city, too.