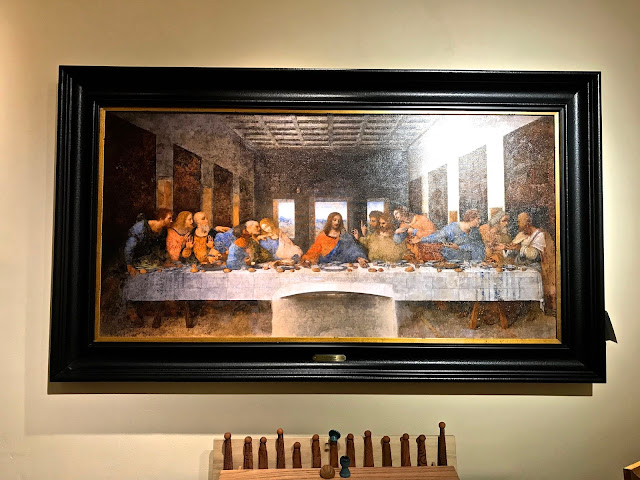 When I went on that art walk last Thursday evening, one of the galleries I stopped at was Sacred Art Gallery.  I probably wouldn't have stopped in if it hadn't been 105 degrees outside, and the air conditioning inside was beckoning.  As it turns out, I'm glad I stepped inside and found this "painting" that caught my eye immediately.  It looked so much like the real thing I had seen two months ago in Milan Italy.  I approached and looked at the tag and saw that this was a giclee print and the artist was rightfully credited to Leonardo da Vinci.  I talked with the gallery employee and learned that many of the pieces in the the store were giclee prints of famous religious art.  It's good to know that this piece of art that is in so much peril will live on in photos and artwork for centuries to come.

I have a new post on Sharon's Sojourns today.  I'm at the third stop on the tour of Milan and there is an amusing story to tell.

It looks like an original painting.
THE Last Super is one of Milan'S TREASURES.

That is a bit disappointing...

And that looks like a wee last supper of some kind down in front of it. What a contrast, Sharon!

Giclee prints look so much like the originals it is sometimes hard to tell unless you can get close to it. The Last Supper looks great even though it is a print.

Nothing much happens by chance...

Well I learnt something new today Sharon, I had to google giclee prints 😉 they're so clever!

Huh! Who owns the rights to "The Last Supper," anyway? Is it public domain? I wonder who's making the money on these?!

Giclees can be quite realistic. I don't criticize people who buy them instead of original art, especially unattainable original art.