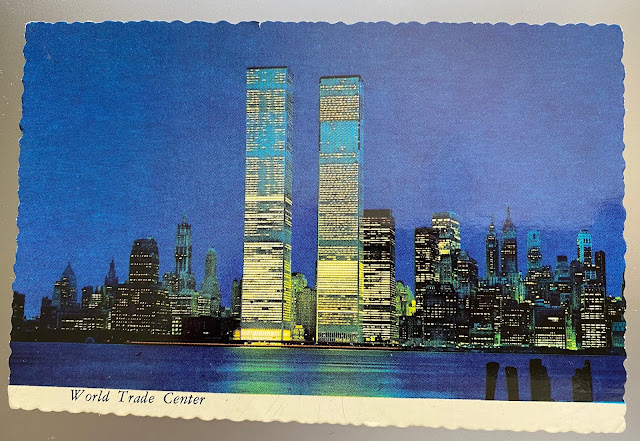 Just a few weeks ago, I found this post card that I had written to my Mom and Dad way back in the late 1970's.  I can't read the exact post mark on the card but it was probably around 1978 or 1979.  I took a trip to Washington D.C. and New York with some friends and I wrote mom and dad about my experience of standing on top of one of the twin towers. 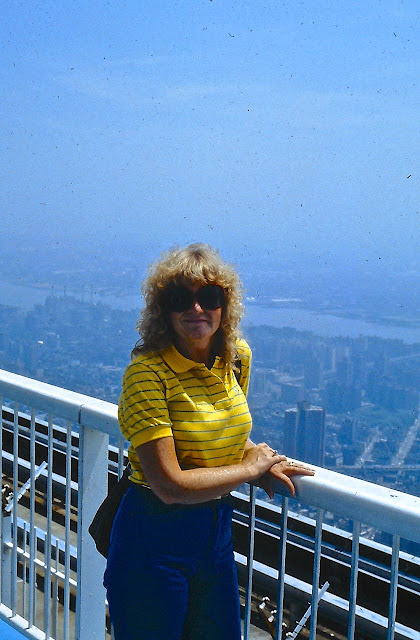 In fact, here's a photo of me standing at the top to admire the view.

That hair is definitely 1970's hair when we all wanted to look like Farrah Fawcett.

As most of you know, today is the 20th anniversary of the terrorist attack that brought these two buildings crashing to the ground.  Finding that post card a few weeks ago seemed very timely and a perfect opportunity to use the card for this post.

I had to do some digging to find the photo of me on the top. 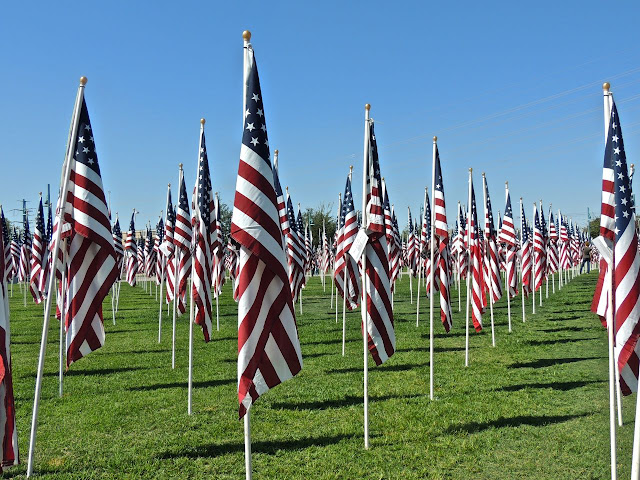 It's hard to believe it's been 20 years since that terrible day.  As with most Americans, I can remember exactly where I was when I heard the news.  I was working one of my contract jobs in San Francisco at the time and I had flown back to that city just the evening before this happened.  So waking up to this news was quite a shock.  I will never forget that evening when I walked to a co-worker's apartment building.  There was not a sole on the street and no air traffic flying over the city.  It was so strangely quiet.

I am not American but it is a day that I will never forget.

One of those moments, when many people remember where they were.

Yes those moments we will never forget.

I remember exactly where I was too.

I too remember where I was and what I was doing.
Twenty years have passed... twenty short years it seems...

Oh, I remember that too -- the complete lack of air traffic. So strange.

It's great that you got to visit the top of the WTC. I always intended to go to Windows on the World, and in fact tried with a friend once, but we weren't dressed properly or some such nonsense and I just never got there. It seemed like one of those things I could do anytime.

I remember waking up that day and watching all the reports coming in. I was living in Fairbanks at the time and there was a four hour difference from the east coast. The day is burnt in my mind forever.

A day impossible to forget.

It was a very odd time.