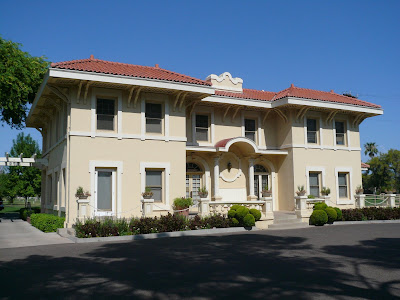 This historic home has belonged to the City of Phoenix Parks and Recreation department since 1935. If you call the city to reserve a park area, you are most likely talking to someone working in this historic setting. The house was built in 1912 by Dr, James C Norton for his wife and four children. Norton moved to the Arizona Territory in 1892 from Ames Iowa. He opened a veterinary medicine practice and later did some cattle ranching on the property surrounding this home. The property was purchased by the city along with some other property to create Encanto Park, a 200 acre park in central Phoenix.
Posted by Sharon at 3:00 AM

What a charming building! I love those roof tiles juxtaposed against that impossibly blue Phoenix sky. Have you ever been inside of it?

Hi Sharon! Just browsing around, it's obvious you're an architecture lover like me. Nice to meet you.

Laurie, I did go inside. I couldn't find any information about the place so, I just popped in. The lady working there was very helpful. They have built two little cube-like work spaces in what used to be the livingroom, but they have not done anything to change the inside. The dining room has beautiful woodwork with a built in buffet topped by a stained glass window. It's in such good shape inside, that they really could do a quick restoration and open it to tours.

Petrea, nice to meet you too! I enjoy visiting your site!

Petrea,
I will respond to your comment to Sharon about her evident love of architecture, as Sharon is probably too modest to do so.

Sharon is a friend of my wife and me, and she is about the most cultured person you could imagine. Her interests are much broader than archtecture, as she is an expert on food, wine, art, the theater, and many other subjects. She is also an Anglophile and Francophile.

We have traveled with her, including visiting the Huntington Library and Gardens right next to your home town of Pasadena. She has visited our place in Costa Rica, and she has joined us in travelling to Buenos Aires to visit my son.

The readers of Phoenix Daily Photo are lucky to have Sharon as their internet tour guide.

Bloggers get around, don't they (we)? David, what a kind tribute. Speaking of which, Laurie (above) blogs from South Pasadena, also close to the Huntington (and to me). Small world keeps getting smaller!

Hi Sharon, yes I did have the daily photoblog in Phoenix then when I left Cheryl started her blog. Its should still be live, its fotographiaphoenix.blogspot.com

Randy, I used to watch your spot all the time before I knew how to even get started. I think Cheryl's site is still active from time to time. I watch it too. Good to know I'm following in some great footsteps. I loved watching you site and I'll continue to watch your new one.

What a charming house! Love the buttercup yellow color.

What a nice picture! J.C. Norton is my great grandfather. My Grandpa Oakley lived in this house as a kid! I have visited the house on 2 occasions, My father Oakley arranged a family history tour through Arizona and we stopped in. The staff was wonderful, they gave us complete access, showed us everything, told us ghost stories, even had a little party with a cake for us! I went back later and they were just as hospitable. The public rooms are in great shape as was mentioned, and the exterior is almost exactly as it was originally when compared to old family photos. There was a trellis to the left of the house that is no longer there, the City staff was very excited that I had photos so that they could eventually recreate it. It is lovely to have such caring people working in the old family home!

I have lived within walking distance my whole life and have always adored it. I remember when I was young I used to plan how it would be my house. I wanted to buy it since before i could remember.
My sisters and I would play hide and go seek around it. We each had our own "rooms" outside and play areas. I wish it wasn't a government building so I could buy it!

Thank you Sharon, what a great site, and a beautiful picture of the Norton House.

I live close by, and pass it everyday on my walk.

I've been trying to uncover some of the ghost stories associated with the building, but there's not a lot out there.

If anyone knows anything of paranormal events at the Norton House, and feel so inclined, please email me at caspraz@gmail.com

We are planning to get married in the grass area of the property. Beautiful home.