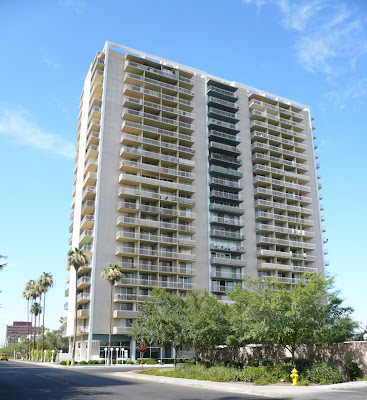 Executive Tower was the tallest building in Phoenix at the time of its construction between 1962 and 1963. It began its life as an apartment building, but has since converted to condominiums. It was designed by a young architect, Al Beadle who had no formal training. Beadle was a former Navy SeaBee and was only 33 years old at the time he created this design. If you look closely you can see some light fixtures that line the sidewalk around the front and sides of the building. This round type of light fixture was a favorite of the architect and they became affectionately known as “Beadle Balls”.
When I first moved to Arizona, I dreamed of living here one day. Coming from a small mid-west town, this was the epitome of sophisticated big-city living to me. Much later, I would get my chance at high-rise living while working special assignments in St. Louis and Chicago. The experience was everything I hoped it would be and much more.
Posted by Sharon at 3:00 AM

1963 doesn't sound that old to me. Glad to see things of "that age" still being put to good use.

I saw the radar on the news this morning. Looks like your soaking continues.

Oh, I love this bit of architectural history. Beadle balls! Who knew?

I've never lived in a high rise -- it's one thing I always wanted to experience. I remember when I was a very little girl in the late 60s/early 70s and the show Family Affair was all the rage. The family lived in an apartment on a high floor and I thought it was sooooooo cool since I lived in a ranch house in the Austin suburbs.

Laurie, I remember Family Affair very well. I even had two dogs named Buffy and Jody back in the 80's.

For 2 years I lived in a highrise facing the St. Louis Arch while working in St. Louis. After that assignment, I moved to Chicago for two and one half years and lived in a highrise one block from Michigan Ave. with windows facing Lake Michigan. I think it was the highlight of my career.

Sharon, I had a Mrs. Beasley doll when I was 4!

Your former high-rise life sounds fun. And what a view!!!