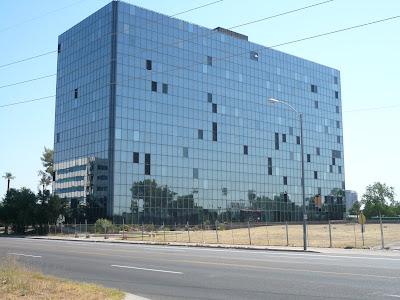 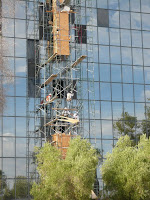 While some old office buildings are being given new lives, others have reached their end. This building started its life as the home of Mountain Bell which became Qwest Communications. Qwest moved to a new location some years ago and in 2004 the building was purchased by a California developer who planned to convert it to luxury condominiums. Rumor has it that the asbestos clean-up proved to be overwhelming so the decision has been made to tear it down. The land covers 8 acres so the plan now is to build a high-end senior community on this spot. An interesting thing about this building is that it was designed by Phoenix architect Al Beadle. The same man who designed the Executive Towers that I featured on August 15th. There are some other Beadle designed properties in Phoenix that I’ll show you in the future.
Posted by Sharon at 3:00 AM

Sharon,
With all due respect tohte architect who designed what looks to be a featureless glass box, I suspect that visitors to your site from older cities back East or in Europe would be appalled at regarding a building such as this one as being "old" and nearing the end of its useful life. It looks like it was built in the 1970's. In most cities that would be regarded as new, not old. I wonder if it is obsolete due to the design of the building or due to economic/market factors.

Dave, I have to say, I was surprised to find that the architect was Al Beadle. All of his other designs were interesting an innovative.

It's my understanding that the cost of cleaning out the asbestos on top of the conversion costs made them decide to take it down.

So, you saying that people who live in glass houses, never got the change to?

I'm surprised this is by the same architect that gave us Beadle balls!

rare to see a modern glass-palace like ths abandoned.

But they still have to remove the asbestos safely before demolition. It's the dust that kills - just one tiny particle inhaled is a death sentence. (It's what killed my cousin.)

I hope they are not thinking of risking locals' lives by doing it on the cheap.