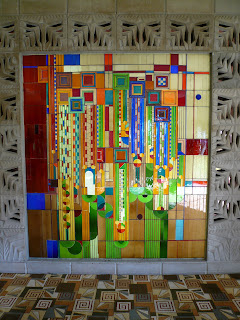 Speaking of Frank Lloyd Wright influences, this beautiful stained glass window is located just inside the front entrance of the Arizona Biltmore. It is entitled Saguaro Forms and Cactus Flowers. It was originally a design Wright created for a cover of Liberty Magazine. It was later fabricated by students of Taliesin and installed in the hotel in 1973. Much of Wright's work was inspired by nature and the stark beauty of the Arizona desert influenced a great deal of his western work.
Posted by Sharon at 3:00 AM

This photo is really well done! What a terrific example of Wright's work, and the way the natural environment represented in his designs.

I have stayed at the Arizona Biltmore. What a lovely place. It's been a good while so I had forgotten the stained glass window. I seem to remember a supersized chess pieces outside???

As a native Phoenician, the Arizona Biltmore has been one of my favorite haunts since I was a teenager. I wouldn’t put money on it, but I seem to recall a small fountain/reflecting pool in front of this stained glass window years ago. The carpeting was quite different in the mid-80’s when I would skip classes at Camelback High School and have breakfast in the hotel’s L’Orangerie dining room (which no longer exists). The design was also geometrical, but in a much more Wright style, and in bright greens, yellows, and oranges. I was told back then that the carpeting was designed by FLW, but I have no way of verifying that. I believe the current carpeting was installed in the late 90’s/early 00’s. It consists of the earth tone color palette that was incorporated throughout the hotel during its last major renovation.

Visited the Biltmore many times, but missed this beautiful stained glass. Reason to return.

Sharon...saw you on PDP so I thought I'd drop by. This photo is indeed worth enlarging. Wow! Powerful and really does bring the Southwest to my Midwesterner's mind. Have always loved AZ and FL Wright's mountain of work. I can see the beauty of Wright and Arizona lives on in your photos. Merci Sharon!

Gorgeous colors and patterns! I love this window. I've learned that I like tribal designs and art much more than the refined ones of Europe. And when I say 'tribes,' I'm referring to different tribes all over the world, including those of the Philippines.