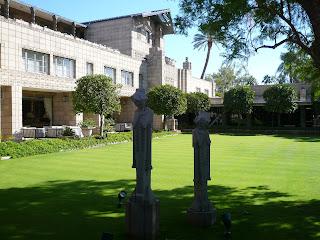 Here is another picture from the famous Arizona Biltmore Hotel. In this picture, you can see some of the masonry work that was influenced by Frank Lloyd Wright. In the foreground are two statues that are now called the Biltmore Sprites. These sprites have a long history. They were originally created for Midway Gardens in Chicago which closed in 1929. The building was demolished and pushed into Lake Michigan as a breakwall. It is said that the sprites were rescued by a member of the wrecking crew who held on to them at his farm for many years. They passed through many hands over the years and were eventually donated to the Arizona Biltmore by the Taliesin Associated Architects. They have found a welcome home here in familiar surroundings.
Posted by Sharon at 3:00 AM