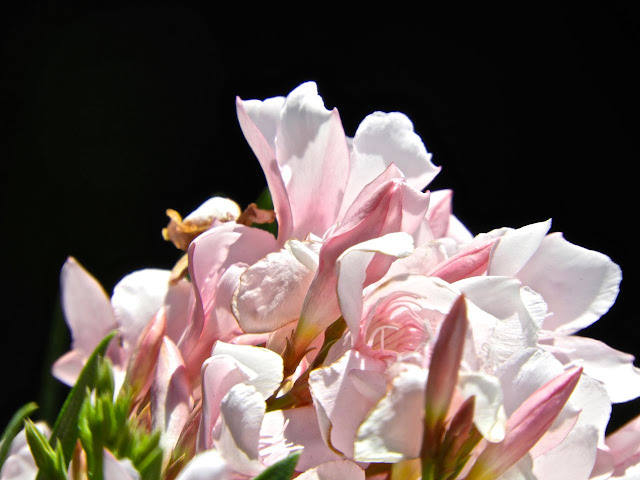 Oleander bushes are pretty prolific here in the valley of the sun.  You will find them almost everywhere.  Because of that, I rarely think about photographing their blooms.  They are just so common.  But, one day last week I parked my car right next to a blooming bush and I thought the blooms looked kind of pretty so I grabbed the camera.  I took this shot with the sun shining on the bush and a building in the shade several feet behind it giving the shot a black background. 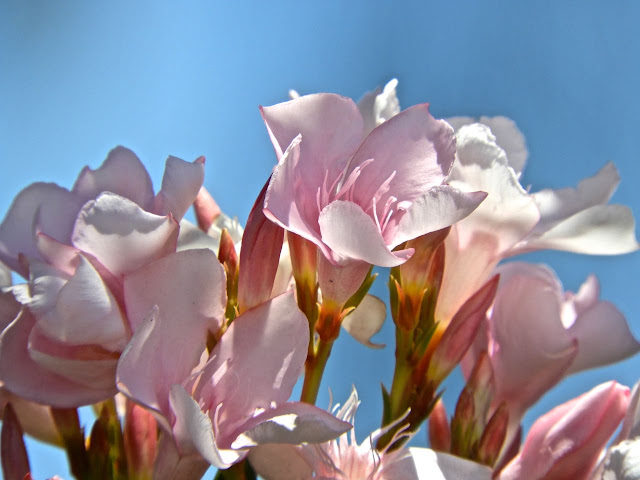 Then I turned around and took a similar shot with the blue sky in the background instead.  Which do you think works better?

With the blue skies in the background is the way to go.

I like them both but the black looks more dramatic! Beautiful flowers that we don't have here!

I never thought of photographing oleanders in AZ ;-) Two summery pictures to celebrate your 4000th post.

I like the second photo. I have found if you can get them in a little shade, and focus on a few flowers that they are really pretty. When there are so many of them, they lose that.

The second one appeals to me most as well.

The second one does it for me, it's gorgeous. Congrats on 4,000 posts, that's incredible and impressive!

So beautiful but so poisonous. btw I like them both.

Well that is a gorgeous 4000th shot Sharon, well done that's pretty fantastic! I think the pink against the blue sky wins for me 💕

Same flowers two directions. It is an education in photography, isn't it? AND . . . congratulations on your 4,000th post. Very cool. It can be hard to keep these blogs up.

I love oleanders too! They used to be planted along a lot of roadways in Florida, but I think the government stopped that because the bushes are poisonous. (Which is stupid, I know.)

I like that second shot -- not only is the color contrast nice with the sky, but the blossoms are more distinct.