Tribute to a Phoenix Architect 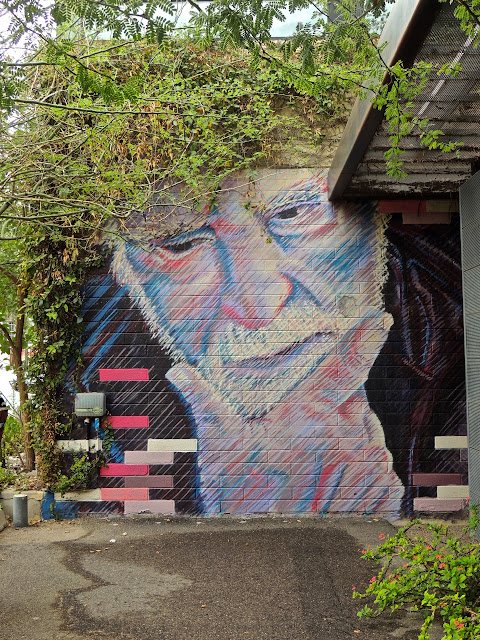 Here is a mural that I would never have found on my own.  It's in a rather obstructed location at the front of building used by a branding company called The Kitchen Sink.  I read about this mural while researching another mural and so I decided I needed to find this one.  You can't see it from the street, so I had to park the car and do some walking to locate it.

The mural is by Berlin-bsed artist Karl Addison and it depicts the architect Frank Henry.  Henry was a Phoenix architect who was a member of the Frank Lloyd Wright Foundation and created some beautiful buildings in and around Phoenix.  One of them is an all-time favorite of mine that I featured a few years ago.  It's the midcentury modern Chase Bank located not far from where I live now.  I love the mural and I'm glad I found it.
Posted by Sharon at 1:00 AM

I remember the banks since it is so unusual, Sharon! I like that mural too!

I always liked the looks of that bank. The mural is unusual and well done.

It is interesting that this mural is in such an inaccessible place, but I am certainly happy that Sherlock Sharon found it for us to enjoy.

I just checked out the bank link and I agree that it is a beautiful and unique bank. I love the design. The mural here is very impressive, I like it. I notice the tree's leaves make it seem like a hairdo on top of his head. :) Nice job locating it Sharon.

I loved that bank too. Nice photo of the mural.

I like it too, the artist is very clever.

It's really well drawn and painted and a great tribute!

A beautiful mural, well located under that tree.

With the greenery above the head it looks wonderful.

That's a great mural, and well worth searching out. I can see why you like that bank building, too! What an unusual and beautiful structure -- very FLW.

It is quite eye catching.