A bit of Arizona history 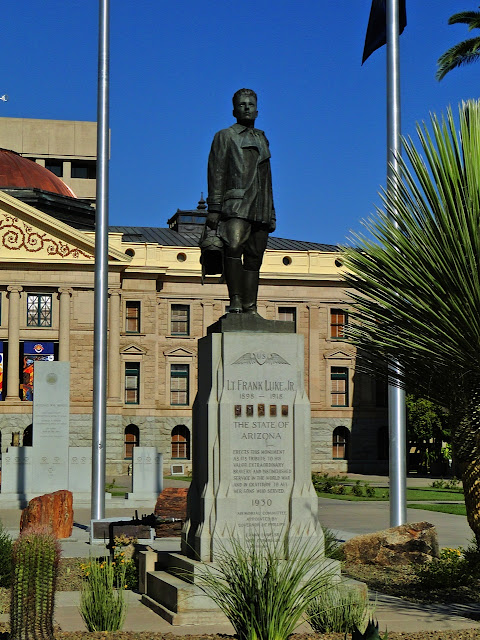 This statue stands in front of the Arizona State Capitol in memory of Lt. Frank Luke, Jr. (1897 - 1918). Luke was born in Phoenix and served as fighter ace in WWI.  In fact, he was ranked second after Eddie Rickenbacker in number of ariel victories during that war.  He was also the first airman to receive the Medal of Honor.  Luke Air Force Base on the west side of the Phoenix, is named after him and is a pilot training facility.  If you look behind the statue near the base, you will see two brown rocks. 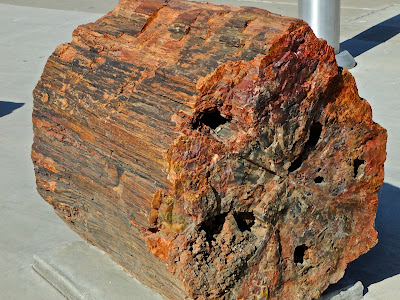 They aren't really rocks, they are pieces of petrified wood from the Petrified Forrest in northern Arizona. What you are looking at is the petrified remains of a tree that lived about 225 million years ago in the Mesozoic era.

So, there you have it, a tiny bit of Arizona history!

It is good to see memorials to heroes of World War I, as the sacrifices by soldiers of that era were horrific, especially among the European countries, and World War I gets overshadowed by Word War II.

haha. when i first visited the petrified forest i was soooo disappointed. i expected standing trees of stone. it took me a few minutes to readjust my expectations before the awe for what i was seeing truly filled me.

And very interesting it was Sharon. Did they ever find out what petrified the forest ...so sorry, I just had to say it before Lowell or Jack haha!

What a fascinating place

Your post triggered long buried memories...I had a very good friend who was stationed at Luke AFB, who married a girl I went to high school with.

Love that petrified rock. I used to have some small pieces we picked up in the Petrified Forest but don't know what happened to them, either.

I think I'm losing my life!

Re Grace's comment: If she's thinking that Jack and I are old enough and petrified enough to know what caused the petrified forest, well, I'd have to say that would apply only to Jack. I'm much younger. Probably. Or not.

Thanks for info...I live here and didn't realize who Luke AFB was named for. There is so much to know. :)

Sharon, did they ever find out what petrified the forest?

Hey, wait. Grace and Lowell got here before I did. It is still a perfectly reasonable question.

Very interesting and the petrified wood is amazing.

Both photos carry some remarkable history.