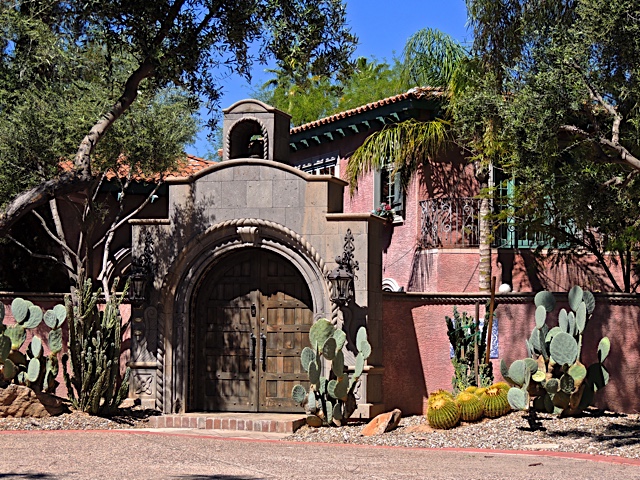 On Friday I took a drive out to north Scottsdale but along he way I decided to take the quieter roads instead of the main streets.  I turned on to a street just west of Scottsdale Road and followed it north for a while and then it suddenly turned into the Scottsdale Golf Club area and from that point on, the street was no longer straight.  Instead in wound its way through the community past large homes and vast green spaces.  I was glad I found myself on such a pretty drive.  There were a lot of very large and interesting homes in the area but, this one actually made me stop to get a closer look.  It has to be the most elaborately decorated Spanish Villa that I've ever seen. 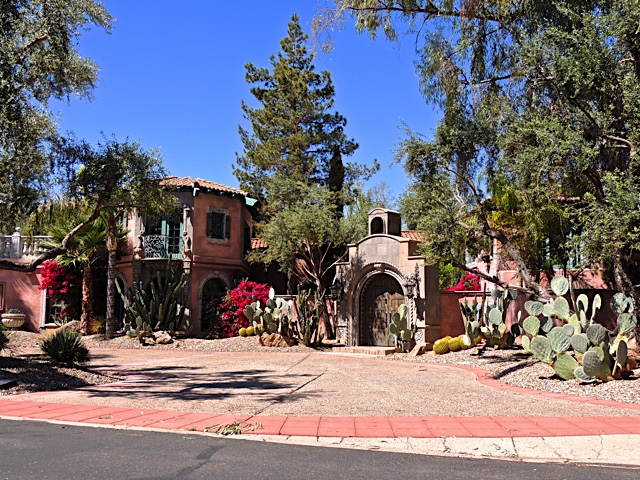 I took this wider view so you could see most of the house as I saw it from the street.  I doubt I could easily find it again.  Those winding streets went in every direction and I just followed the ones that looked the most interesting.

I have a new post on Sharon's Sojourns today.  I'm looking at a surprise find inside the Siena Cathedral.
Posted by Sharon at 1:00 AM

Very Mexican it is.

I love Spanish villas and this does appear to be an especially pretty one. Would like to see inside. Would you mind knocking on the door and ask to take some pictures? :)

I wonder who lives there!

What an amazing find Sharon.. from the wonderful wooden door, the pink coloured walls and the huge cactus.. could you even get more Arizona than this!

That's an amazing house. It's a regular hacienda! It looks pretty large, too.

I do not find myself enamoured of this residence as some of the other responders. I think the door is magnificent and it is clear that cacti are important landscape plants, but I think that is is a bit too busy for my taste. That said, I'm sure I could force myself to take up residence there if offered the chance.

It looks like it was added to over time, with a variety of architects.