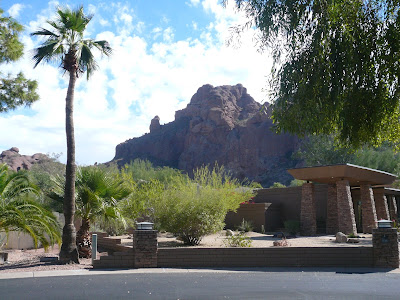 On the west end of Camelback Mountain attached to the “head” of the camel is a outcropping of rock called “The Praying Monk”. That name has been adopted because from a distance this formation resembles a monk on his knees praying. The above picture is taken close to the base of the mountain as near as the road gets to the outcropping of rocks. 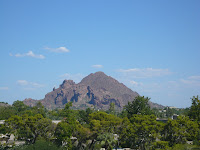 The small picture shows Camelback Mountain from a distance. You might have to click on this photo to see it better.
So, what do you think? Does it look like a praying monk to you?
By the way, Camelback Mountain is another Phoenix Point of Pride.
Posted by Sharon at 3:19 AM

Praying Monk does indeed look like a praying monk, even more so, in my opinion, when viewed looking west from the Paradise Valley/Scottsdale side of Camaelback.

I really like the rocky mountain previous to the big one. Also find the building very cool, a mix of modern and native architecture I suppose. The stone pillars are great!

Yeah I can see the praying monk, but it also looks a bit like a giant dinosaur seen from the back.

Darn - I never can see the monk. Not in this picture, either.

I totally see it!

I don't know about the monk but I think it's summer all over the year in Phoenix...November here in Brittany makes me miss the light.

Ooh, yes it does! To me it looks like he's on his knees and sitting on his heels.

The rock mountain's awesome. I also like the structure in the first photo — blends very well with the environment. What is it?

JM & Hilda, That building in the foreground is a home. All along that road in the foothills are beautiful and large homes.

This is where I was born and raised. Beautiful photos of my home state.