Where have all the Flowers Gone 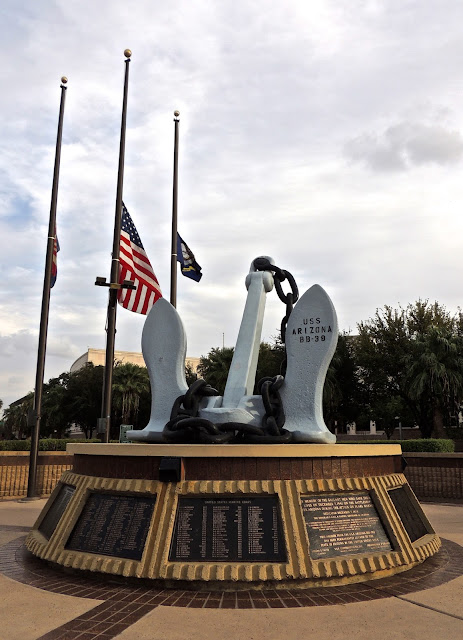 Yesterday was the anniversary of the bombing of Pearl Harbor and the sinking of the ship the USS Arizona.  Sometime around 1:30 in the afternoon, I happened to see a photo taken at the USS Arizona memorial and it was surrounded with flowers and wreaths.  I decided that I should drive down there and snap a photo so I headed that way.  I was surprised when I got there that there were no flowers or wreaths.  I have no idea what happened to them.  I can't imagine why they would be taken away but, apparently they were.  So here is the memorial sans flowers. 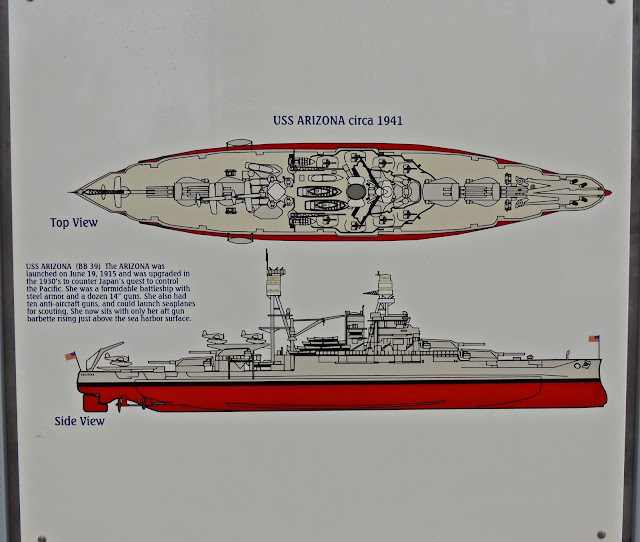 I guess there was a memorial service sometime in the morning but all evidence of it had been taken away by the time I arrived.
Near the memorial was this plaque describing the ship.
Posted by Sharon at 1:00 AM

That is odd, around here the wreaths are left up for weeks

I think it was nice gesture of to attend the monument. It was a day in history that changed everything forever.

A terrible event to think of but we must remember this cost for freedom. The memorial with the huge anchor is great there. Maybe the wreaths and flowers were then distributed to Veterans homes etc?

How strange! You'd think the flowers would be allowed to remain at least through the day. You caught the flag at half-staff, anyway.

I was very young in 1941, but I do remember the sense of dread and abject fear among my family and friends with the attack on Pearl Harbor. God help us, but we've got a bunch of warmongers in places of influence once again in our government.

Was it hot Sharon, could they have moved them so they didn't frazzle in the sun? One more day that the world will never forget.

It is a beautiful memorial. One would think that they would have left the flowers at least for the rest of the day.

I wonder if they donated the flowers to a hospital or nursing home. I'm glad you went and got the shot of the memorial any way.

I wonder what the reason could be to remove them. Let's hope they went to some worthy place.

It's a stirring, dignified memorial.

Here the wreaths are generally kept in place at least a full day after Remembrance Day, for instance.

We memorialize the fallen but it's not a good event to remember.

I saw something on the news about a new memorial at ASU. Where is this one?

This one is located at Wesley Bolin Plaza, the park in front of the site capitol.