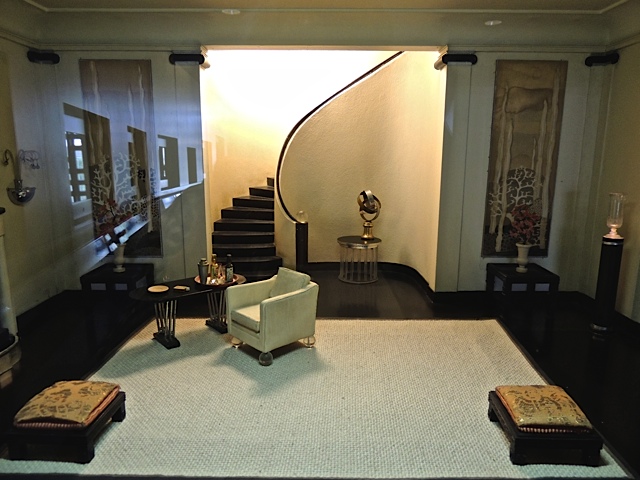 There is a room at the Phoenix Art Museum that houses twenty miniature rooms that are viewed through windows.  They are part of what is known as The Thorne Rooms.  After the turn of the 20th Century, Narcissa Niblack Thorne started collecting miniature furniture and accessories during her travels to England and the Far East.  She had the idea to put the collection into beautifully crafted room settings and beginning in 1930 she and the craftsmen she worked with created a total of 98 rooms.  Phoenix is lucky to have 20 of these rooms.  The one above is one of my all time favorites.  I do love art deco.

The majority of the rooms are located at the Art Institute of Chicago where I was lucky to see them back when I was working in Chicago.  They have 68 of the rooms.  The Knoxville Museum of Art has 9 and the two remaining are located in the Indianapolis Children's Museum and the Kaye Miniature Museum in Los Angeles.
Posted by Sharon at 1:00 AM

I've heard of these rooms in Chicago. In fact there's a children's book about them called "The Sixty-Eight Rooms," which we have in our school library.

John "By Stargoose And Hanglands" said...

I love it - though I can't help thinking that Narcissa Niblack Thorne had a very odd calling in life.

Remarkable! I lived in Chicago for 6 years as a young adult, and I used to haunt the museum because it was my first experience with a large and remarkable establishment. I remember those rooms so well. I keep saying that I need a long over-due visit, and I should make that happen soon! Thank you, Steve, for the tip about the book!

How fun to get to see this!

I would never say it's a miniature. Fantastic! You know I love Art Deco too and it seems to me that Hercule Poirot is about to show on those stairs! :-)

I like the look of this display. I wouldn't have thought it to be a miniature either.

Absolutely realistic Sharon! How delightful to be able to see these miniature rooms.. ditto with the Art Deco, such an elegant style.

I'm the same as JM! I thought of Poirot immediately! I would have never thought that this was a miniature, Sharon!

Make that three of us expecting Poirot. You could have fooled me, this is brilliant!

I forgot about these wonderful little miniatures. You got a great shot, really does not look like a miniature. I will have to visit these again soon.

If this is a typical example, then she created quite an impressive collection.

I remember being facinated by these when I was in school and we had our first field trip the museum.

How exquisite!And your picture is such a perfect example.