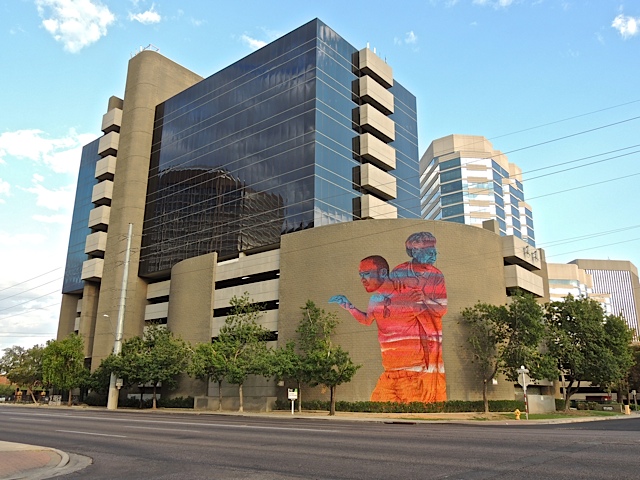 There is an office building not far from where I live on the corner of Thomas Road and Central Avenue that recently went through some major renovations.  A few months ago, this mural was painted on the side of the building and I've been waiting to see some sort of sign to tell me the meaning of the mural but, so far nothing has shown up. 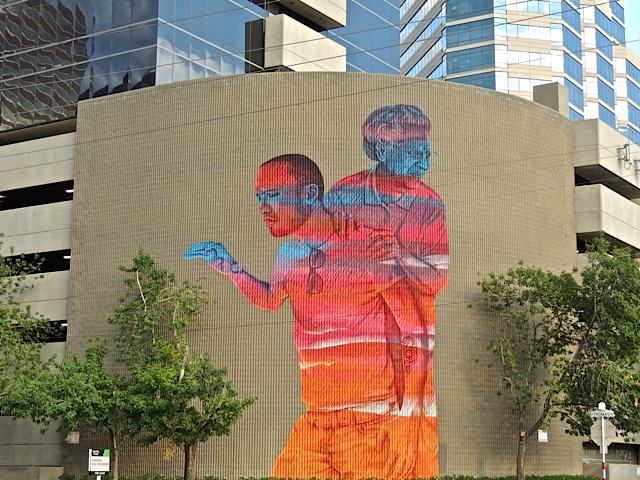 It kind of has a "big brother" look to it but, I haven't seen any sign that the Big Brother organization has moved into the building.

So, it's still a mystery to me.

UPDATE:  Therese of Toulouse A to Z... found the name of the artists for me and I did some more research this morning and found a story about the two Berlin-based artists Karl Addison and James Bullough who created this mural. You can read it here.
Posted by Sharon at 1:00 AM

Nice with a mystery every now and then.

He's looking at the tree.

Love these huge scale works Sharon, so interesting to see how they work.. Quite often it's impossible to find out what they're about.. we have to just enjoy them :)

I like it! If you find out anymore information about it you will have to let us know.

It makes that corner a special place, Sharon!

I read the article but I still am not sure what the mural represents. It looks to me like an old person behind a young man. It is interesting and I wonder if it is finished. Nice find!

Grabs the eye, for sure.

Interesting colors for people! I like the way they seem to be checking that tree for lice (or something). :)
I am off to read your link on the artists now! Maybe I'll find some of their work here in Berlin.

It certainly is enigmatic!

I love it. So colorful.

The article was interesting but it still didn't tell us what the mural means, did it?

It does seem to be well-painted, though I can't interpret it and the article didn't help me understand it.

I know I am an old fogey, but I don't know that a proliferation of murals is going to make Phoenix a better city.

The mural brings life to the corner.

Well, it's an interesting, colourful mural at least! Definitely livens up that building.

This fantastic mural adds so much to the building!