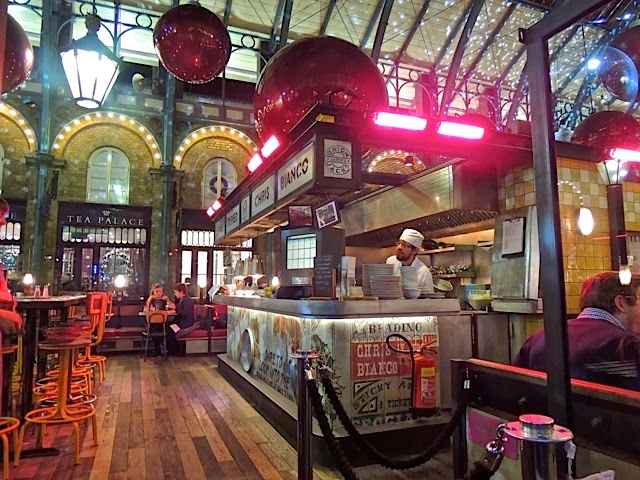 I'm sneaking in another photo from London but, this time there is a Phoenix connection.  A few years ago I had a post about Pizzeria Bianco in Phoenix right after the restaurant earned the title of the best pizza in the U.S.  A year or so ago, Chris Bianco joined with Jamie Oliver to open a pizza place in London at Covent Garden.  I searched it out to give the pizza a try.  It was great!  The pizza I had was very similar to one on the menu at the Phoenix restaurant but it had a couple of solid English spins on it. 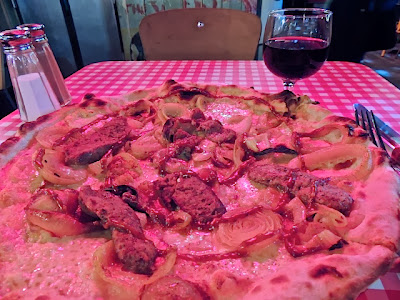 I took this photo of the pizza but, I was sitting under one of those glowing heaters so the color in the photo is a little off.

I'm kind of wishing I had a slice of it right now.
Posted by Sharon at 1:00 AM

Labels: out of Phoenix, restaurant

What a crazy restaurant! It sounds delicious (I'm a big fan of Jamie Oliver - in my eyes, he can do no wrong!).

What a great way to compare!

I was puzzled upon first seeing that your post was about pizza in London, as I would ordinarily not think of London as a place for great pizza. Then I read about the connection to Pizzeria Bianco, and I am sure this is the best pizza in London.

It is fun to discover a slice of home in a distant land.

It looks nice in there. I wonder about those big bubbles up by the roof. Me...I just would be happy with a Gem City pizza right now. Or Maybe Giovani's.

It's great to find a connection between two countries.
Speaking of food, if you find your chocolate peppermint cookies (comment on my blog today), will you share recipe? I'm trying biscochitos for the first time this year, and if they're any good, I'll share! I'm a cook but not a baker so this will be a challenge plus I'm trying out my new convection oven.

Looks like a wonderfully eclectic restaurant... and since I'm a fan of pizza... yum!

When we toured Europe in '85, pizza was the one universal food we found everywhere . . to our amazement.

Are those bangers on the London pizza?

Lots of stuff on it, Sharon. We tried the Jamie's Italian in Liverpool and the food was great there too.

They do have wonderful pizza. Why not share it with the world.

Me too Sharon :) Gosh that Jamie Olivier has his finger in so many pies these days, he does do Italian so well though.