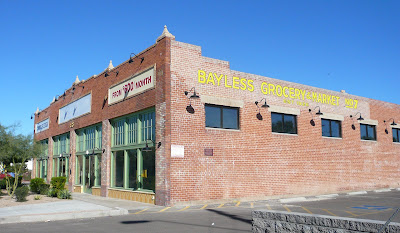 A J Balyless was a popular grocery store chain until the early 90’s, when it merged with another locally owned grocery chain, Basha’s. Basha’s stores are very well known in Arizona and with the merger with the Bayless enterprise, a new upscale gourmet market was created. The new market was named AJ’s Fine Foods in honor of the former owner and keeping the two distinct businesses and their marketing approaches independent.

This building on the edge of downtown Phoenix was once one of the old A J Bayless stores many years ago. The building has recently been restored and is now available for rent. Wouldn’t this make a wonderful gallery space?

Yes, I agree, it definitely would. Hope it finds a taker.

Sadly, in this economy there are lots of empty spaces. It seems that arts districts often get their start by moving into cheap warehouse and retail spaces that other businesses did not want, and then the area becomes more trendy, and expensive.

A fantastic open space could be done inside, keping the façade just like that.

I remember shopping at the A.J. Bayless stores. That one would make a fine setting for a gallery or maybe a restaurant?

History is interesting but yet "progress" does't always acknowledge that.

Could it be remodeled into a living space? They do that in downtown Memphis.

We shopped at Bayless all the time - in the early 60s we'd spend $25 and wonder how we'd make it through the week!

I thought AJ's was named after A.J. Chandler, the namesake of the Arizona town that is home to Basha's corporate headquarters. I guess I was mistaken.

I grew up in Douglas which had two supermarkets at the time: Bayless and Safeway. Love the old brick of the building.