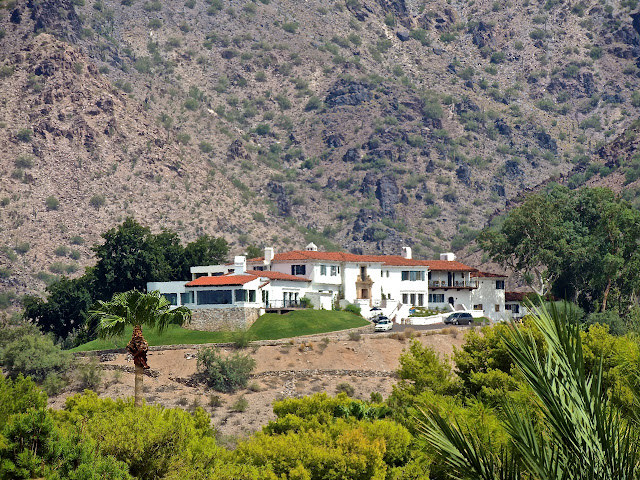 Last Friday I skipped an outdoor concert because of the wind and cold temperatures here in the Phoenix area.  Just as I had curled up on the sofa to watch the evening news, my friend Julie called and asked if I had eaten dinner yet.  I hadn't so she suggested that we go somewhere.  I have to admit, I didn't expect to go somewhere quite like this.  We ended up at the Wrigley Mansion.  I've probably had a post about this place years ago but I hadn't been here in many years so it was a treat to go again.  I used this photo from a while ago so you can see the building.  It was too dark to take one that night. 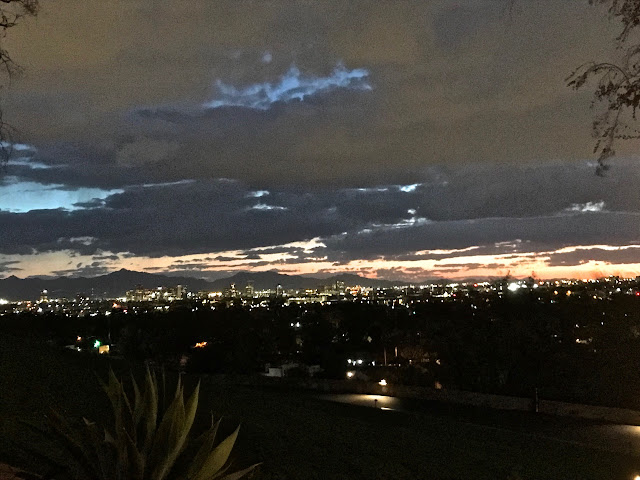 The Wrigley Mansion sits on top of hill just overlooking the Arizona Biltmore Hotel on one side and the city of Phoenix on the other.  It was built between 1929 and 1931 for William Wrigley Jr.  It was his "winter cottage".   That's some cottage!  It is now a fine dining restaurant and event space.  This second photo was taken with my iPhone of the view over the city.  Tomorrow I'll show you a few pictures from inside.
Posted by Sharon at 1:00 AM

That was a nice surprise, it looks very good.

Fancy cottage and stunning views! Looking forward to seeing inside!

Oh my gosh Sharon! From sitting on the sofa to being whisked off to a mansion for dinner.. that's not something that happens every night ☺ looks amazing, what a position up there on the hill. Can't wait to see inside!

Spontaneity has its rewards! Your friend had a great idea to which you responded. . .it's a wonderful way to live!!

It's the backdrop to that mansion that I find amazing.

I learned long ago that when someone calls a house a "cottage" it almost certainly isn't.

Well, that was a nice surprise!

How the other half lived! What a cottage!

That's the trouble with these rich Chicagoans...they build all kinds of little cottages like this which are then underused so they've got to turn 'em into restaurants and museums to make them pay for themselves. I must say though, that even though it's rather small, it does have a nice view. Carpe diem!

Surprises are fun, aren't they. What a stunning view, very impressive I may say.

This place is open to the public? I hope I remember that next time I am in Phoenix.