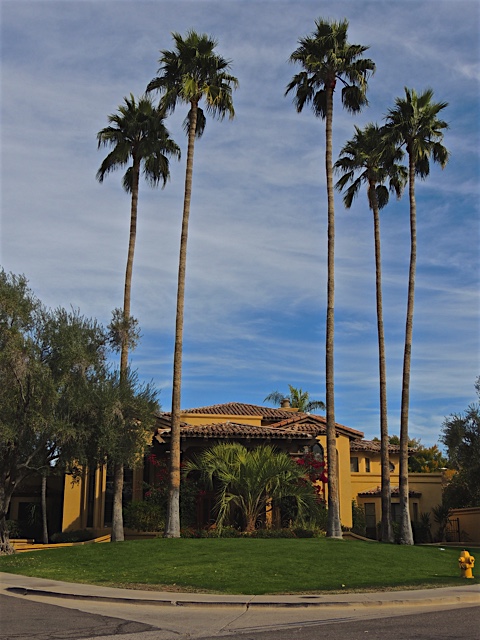 This house looks quite stately with those very tall palm trees framing it.
I thought a picture of a house was the perfect segue into telling you about the movie I saw last Thursday evening.
I went to see the movie "The Big Short" based on a book by Michael Lewis.  I had never read the book but, I knew enough about the 2008 economic meltdown to wonder how such a sobering set of circumstances could be put into a movie.  I would say that the screenwriters (Charles Randolph and Adam McKay) did an outstanding job.  They were able to explain the tedious and complicated details of the investment deals with rye humor and eye-catching wit while getting across the seriousness of the situation.  I liked the movie so much, I ordered the book.  I'm very interested in learning more about the real people that the characters were based on and trying to understand if they really tried to open everyone's eyes to what was going on or if they just figured out a way to profit from the illegal actions of the banks and investment firms.
Posted by Sharon at 1:00 AM

Thks for the input, worth reading the book. The picture matches perfectly the subject.

I just don't know how you found my house! Sheesh! Love those royal palms. All the cheating and illegal actions continue and the perpetrators continue receiving unconscionable bonuses. Wall Street works with the corporations to rig the system against the people. Did you know that GE pays no taxes at all and has 500 attorneys which do nothing but make certain that situation continues? Aargh!

Wow, they are really tall !

I remember watching a doc on the guys who started seriously looking into Bernie Madoff's crimes.

I'll have to look into it... This is a lovely scene!

Strange that the story of fiscal misconduct could have been made into a comedy but I've heard it is very good.

I saw The Big Short a few days ago, too. Superb! My background is in finance, so I understood the issues and the financial instruments, and was quite impressed at how well the movie explained those arcane issues so well for audiences with different backgrounds.

I love those big palms. I was thinking about going to see that movie, maybe I will now.

Hadn't been interested in it until I read your review; I'll try to get it on my Kindle while I am here in México.

I loved the Big Short. That's one of the delights I have in returning to Phoenix is the opportunity for movies. My five years in Texas only produced two movies! Not that they weren't available but that they were all so far away!