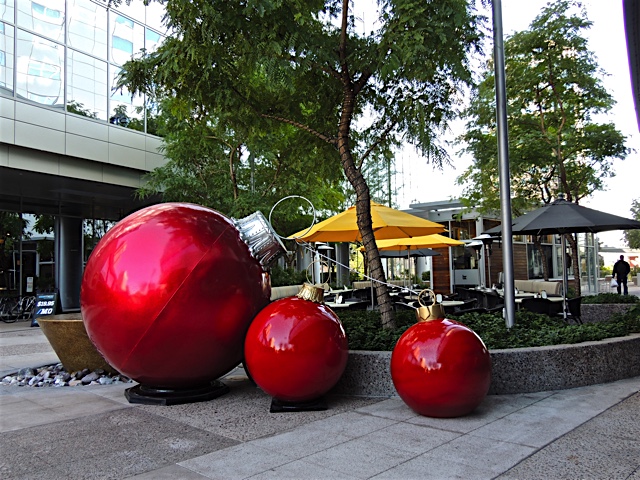 Cityscape is an office/hotel/restaurant/retail complex in the heart of downtown Phoenix.  It's where I met Janet for lunch on Wednesday.  She works in the office tower there and we had lunch at the restaurant at the hotel.  Just outside the door of the hotel were these giant Christmas ornaments decorating the plaza.  Cityscape is divided into two sections across the street from each other and the ice skating rink I featured yesterday fills the street in between the two sections.  I believe it will remain there closing the street until the end of January.
Posted by Sharon at 1:00 AM

The vivid red decorations are fantastic. Great too see at such a large scale.

This is so nice to have such things in the downtown area for people to enjoy. I really love these Xmas balls!

I'm beginning to be really jealous of all your decorations!

The Valley is becoming an artistic showplace.

I love pedestrian spaces like this. Did you know there's a plan to "pedestrianise" Oxford Street? I'm not sure it's going to happen but it's being studied.

Despite their size the bulbs actually look fragile to me as do the small Christmas balls.

I love those big red balls

Easily, the article is actually the best topic on this registry related issue. I fit in with your conclusions and will eagerly look forward to your next updates. Just saying thanks will not just be sufficient, for the fantasti c lucidity in your writing. I will instantly grab your rss feed to stay informed of any updates. Core Spun Yarn